The KSU Aquaculture Research Center is located at 103 Athletic Road, Frankfort, Ky. just off the main campus. Athletic Road is about 100 yards from the Martin Luther King Jr. Drive and Frankfort connector section. 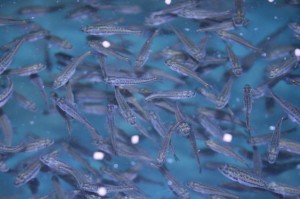 New alternative development of production technologies is always being tested for Recirculating aquaculture systems (RAS) and are advantageous for allowing production to occur in close proximity to existing markets and generally provide for year round production by control over physical and chemical water properties. The major disadvantage of RAS is the infrastructure costs associated with start-up including: building, tanks and components. Throughout Kentucky, and much of the US, there exists an opportunity for aquaculture production using abandoned hog barns. Kentucky hog and pig inventories declined 46 percent from 1997-2007; this trend was common throughout much of the central US. This significant change in the agricultural landscape has left a multitude of abandoned hog barns that may be suitable for fish production. Many hog farrowing barns contain troughs ranging in size from 5-100 m2 that in most cases drain to lagoon ponds. These structures can be converted to fish production with the construction of in-tank solids removal and bioreactor compartments. These converted trough systems can be easily operated with air lift pumps to provide water circulation and larger facilities could be converted to mixed-cell raceways. 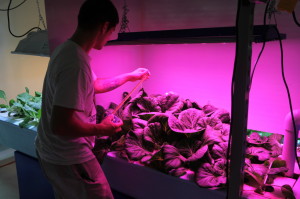 Several challenges have consistently hindered development of local and regional food systems, with a major one being seasonality of production. However, an indoor production system has been in development which can produce both fresh fish and vegetables year around and be located directly within urban areas. This puts production in close/direct proximity to the consumers. In the US, the average agricultural product travels over 1,500 miles from the farm to the consumer. Not only does this travel compromise the nutritional integrity of the produce, it also creates a very large carbon footprint during transportation. One way to decrease the average “food miles” is to produce the food in closer proximity to the end consumer. With the increasing urbanization of the US, and in fact the world, that means producing food in or near the cities. Aquaponics is the integration of aquaculture and hydroponics.  Fish are raised at high densities in tanks.  The water containing their waste products is circulated out through hydroponic beds where the fish wastes act as fertilizer for the plant crops.  Their removal by the uptake of the plants cleans the water, which is then cycled back to the fish in a constantly recycled system. Aquaponics is a model of sustainable food production as; 1) the waste products from one biological system serve as nutrients for a second system, 2) its yields multiple healthy crops, 3) it is extremely water efficient and 4) being located in the urban setting puts production in close proximity to the end consumers. It is also one of the most efficient and highly productive systems yet developed in terms of production per square foot, production per liter of water, and production per unit of feed/nutrient input. 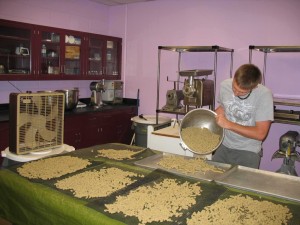 A major focus of nutrition research in recent years has been the need to reduce the demand on the world’s oceans by decreasing the use of fish meal in aquaculture diets. This requires identifying and characterizing alternative protein sources and their application to different aquaculture species.  The U.S. currently imports 40% of the oil it uses, but over 90% of its seafood. As we work on ways to develop energy independence, through the production of biofuels, two major sources of biofuel production may also hold promise as means to reduce aquaculture’s dependence on fish meal. These options are the by-products from fuel ethanol production and from algae production for biofuels. The production of fuel ethanol in the U.S. has increased over 700% in the past 10 years. As fuel ethanol is produced there is a concomitant production of by-products. Some, like distillers dried grains with soluble (DDGS), have a long history of being fed to livestock and KSU is recognized for its work in evaluating this product in aquaculture feeds. Algae production also shows great potential for producing high quality biofuels and there are estimates of producing 5,000 gallons of fuel per acre per year. As these algae are harvested, the lipids are extracted and converted to fuel. The remainder of the algae cell can now be used as an ingredient in aquaculture feeds and has been shown to have excellent amino acid and fatty acid profiles for aquaculture diets. 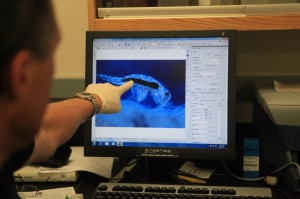 Dr. Robert Durborow is a fish pathologist and director of KSU’s Fish Disease Diagnostic Laboratory. He and his students: 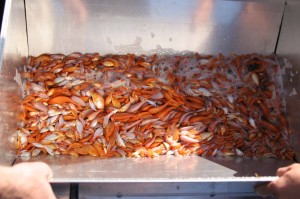 Ornamental koi carp is a popular decorative fish in the United States and all over the world. The value of koi significantly depends on color combinations and patterns. This study investigates mechanisms of color inheritance in koi and is intended to improve the quality and value of fish raised by American producers. This study includes crossing of koi with different color types and genetic analysis of color variability in offspring. Based on results of this study, mechanisms of color traits inheritance will be revealed the most optimal types of crosses will be recommended for koi producing farmers. 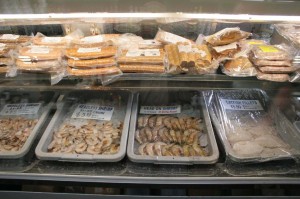 Types of research conducted include: 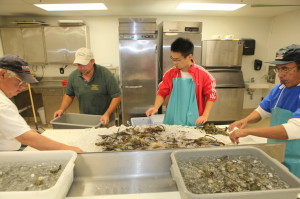 Value-added products are essential to compete in non-traditional markets such as high-end restaurants, gourmet shops, etc. in the Great Lakes and Northeast Regions of the United States. Research and development of value-added products (i.e. hot smoked fish products) and market identification and development would greatly benefit Kentucky aquaculture. These products that are ready-to-eat foods will fetch higher prices with greater profit margins for farmers and encourage future growth of the fledgling aquaculture industry in Kentucky. If outlets are identified for smoked fish, producers would have access to different markets than the fresh and frozen fillet markets, and Kentucky will be more competitive.

Research in product development of value-added products (i.e. hot smoked fish products) and market identification would greatly benefit Kentucky aquaculture. Such ready-to-eat foods will fetch higher prices with greater profit margins and in return should bring fair prices to the farmers to encourage future growth in this fledgling aquaculture industry in Kentucky. 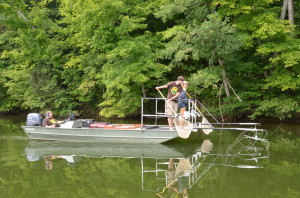 For over 5 years, Kentucky State University have been collecting phytoplankton biomass, and nutrient concentrations in water supply lakes in Kentucky to determinate if there is any change in the trophic state after the stocking of paddlefish. Total nitrogen, total phosphorus, photic-zone, conductivity, temperature, oxygen profiles, zooplankton, and phytoplankton are being collected. Furthermore larvae, juveniles and adult fish are being sampled. These data will allow quantifying the influence of paddlefish on phytoplankton, zooplankton, and planktivores and piscivores fishes. To date, no negative effects have been reported. Based on anecdotal information, one municipality has observed a reduction in blue green algae from 2008 to 2010 after the stock of paddlefish, significantly reducing their cost of adding algaecide. The paddlefish are being monitored in these water supply lakes in Kentucky for survival, growth and progression to sexual maturity (>8 years), when females can be harvested for roe. The results of a state-wide survey mandated by the Kentucky Legislature showed strong public support for the concept of paddlefish ranching in the state’s large reservoirs. Reservoir ranching of paddlefish could become an economically viable alternative to current river fisheries for wild paddlefish that are being increasingly restricted to the point of closure. 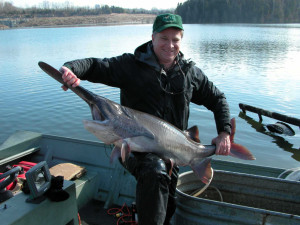 Reservoir ranching is overall, a highly sustainable, extensive (little to no input of feed, generated energy or other technology) culture system in which young hatchery-produced fish are stocked at low densities (25-75/ha) (10-30/acre) in existing freshwater reservoirs, feed on naturally available foods, and are harvested when they reach the desired size or age.

Since the hatchery rearing stage of reservoir ranching involves feeding of pelleted diets, sustainability is lower than in the grow-out stage after stocking in the reservoir. Paddlefish stocked for reservoir ranching would be harvested for caviar at the age when females are mature and for meat when the fish reach the appropriate size for the market.

Reservoir ranching can be practiced in private reservoirs, where the fish are owned by an individual or other business entity, or in publicly owned waters, where a government agency manages the fishery and harvest is performed by licensed commercial fishers. Reservoir ranching has long been practiced in China and other Asian countries for food fish production.

Reservoir ranching is part of a larger group of practices known as culture-based fisheries. In the United States, culture-based fishery practices are used by government agencies to enhance sport fishing opportunities. These practices include introducing new and sometimes exotic species, stocking natural and man-made water bodies, supplementing with fertilizer, engineering the environment for habitat modifications and improvements, altering species composition by eliminating undesirable species and stocking only select species, and introducing genetically manipulated or modified species. 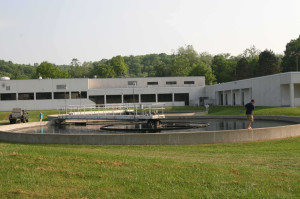 Reclaimed water is water that has received at least secondary treatment and basic disinfection. With stricter regulations and better methods for processing waste water, many municipalities are now building new, larger water reclamation facilities, and decommissioning the old ones, many of which include sedimentation ponds and tanks that could easily and economically be converted for aquaculture. Many are being needlessly demolished, when recycling them as fish culture facilities could save the community demolition costs, create new jobs and generate revenue. In addition these old urban facilities that could be used for intensive fish culture are often built adjacent to new facilities providing a reliable water source and zero discharge of waste water from fish. Furthermore there is abundant zooplankton population (i.e. Daphnia) at some facilities that can be harvested from the clarifier tanks and fed to young fish. The overall goal of this project is to develop a safe and sustainable water supply for aquaculture using reclaimed water. Since 2006, Dr. Mims has performed research on the reuse of reclaimed water for aquaculture purposes. 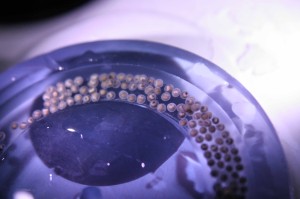 Paddlefish are highly valued for their black roe processed into caviar. Direct gynogenesis is a sex manipulation technique to sway the population towards female production. Basic and applied techniques have developed about a 30% increase in female paddlefish or about a total of 80 % females compared to about 50% normally produced using traditional propagation techniques. The sex determination system is described as a wz (female):zz (male) ratio where the female is heterozygous. Current evaluations have shown mature gynogenetic females provide similar fecundity and roe production as traditionally propagated paddlefish. Currently, gynogenetic progeny brood stock are being propagated to evaluate if all-female (100%) progeny can be produced by breeding. In conjunction with sex manipulation, basic and applied research has been conducted on cryopreservation of paddlefish spermatozoa. Use of methanol as a cryoprotectant provides relatively high survival (over 50 %) and good motility of frozen-thawed. Further, a technique for storage of large volume of milt (5 ml storage straws) has been developed for commercial propagation use.

Significant areas of research are: 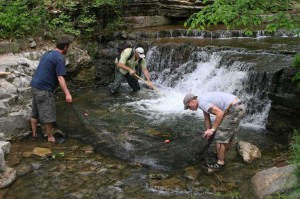