School of Humanities and Performing Arts

Carmen Quintet performed by members of the Opera/Musical Theatre

“Look Down Lord” from ROSEWOOD

What is the Kentucky State University Opera/Musical Theatre Workshop?

Kentucky State University’s Opera/Musical Theatre Workshop is a performing arts organization in which students can participate in a professional training program where emphasis is placed on musical theatre as a dramatic singing art form. Since its inception, the Opera/Musical Theatre Workshop has rapidly progressed and grown to unexpected heights.  The workshop has developed a unique program of performance-based projects that cater to a wide cross-section of the community.

Starting the journey with 2018, the Opera/Musical Theatre Workshop presented its third annual GALA on April 20, 2018.   This year the Frankfort Arts 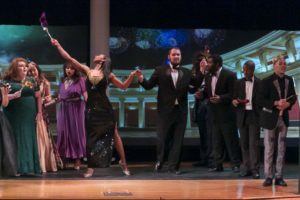 Foundation partnered with Opera/Musical Theatre Workshop production.  The GALA featured highlights from Mozart’s Don Giovanni; Bizet’s Carmen; Verdi’s Nabucco; Gounod’s Faust; Beauty and the Beast; and the Grand Finale, “Masquerade” from Phantom of the Opera.  The ‘GALA’ aired on FPB Cable Television 10 on April 27, April 28 and May 6, 2018.

Moving on to 2017, the Opera/Musical Theatre Workshop presented its second annual GALA 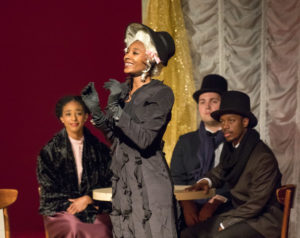 on April 25, 2017.  This year has been a spectacular year for the Opera/Musical Theatre Workshop with special recognition in the form of a “Proclamation” from Governor Matt Bevin proclaiming April 25, 2017 as KSU Opera/Musical Theatre Workshop Day.  The GALA featured highlights from Mozart’s Le Nozze di Figaro; Delibes’ Lakme; Puccini’s La Boheme; The Phantom of the Opera; Wizard of Oz, Evita, Sound of Music; and the Grand Finale, “The Circle of Life” from Lion King.

Community members commented “It was a BEAUTIFUL show; I really couldn’t tear myself away.  Your direction and the students were AWESOME!  “…– what a great show!”

Enjoy the excerpt from the Finale, “The Circle of Life.”

This year’s GALA was recorded by Frankfort’s Cable Channel 10 and had its first television broadcast on May 12, 2017. 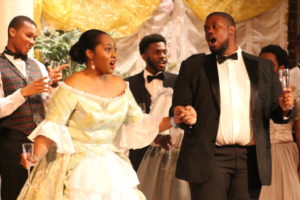 under the direction of Dr. Caroline G Gibson, Assistant Professor of Music and Vocal Artist in Residence. The April 27 matinee/dress rehearsal was presented to school-age children while the actual GALA performance occurred on April 28, 2016, at 7:30 p.m. in Bradford Hall Little Theater.  The GALA featured excerpts from Verdi’s La Traviata; Bizet’s Carmen; Mozart’s, Le Nozze di Figaro; the poignant “Bring Him Home” from Les Miserables; and “Make Our Garden Grow” from Candide.

“Not to be outdone, the Music Department presented its Opera/Musical Theatre Workshop ‘GALA’ in which students in the workshop performed.  Their performances were superb.  I thought I was at The Met!  They demonstrated the talent which abounds within the Music Department here at Kentucky State University.  I kidded with the students about how they can learn Italian and French, and speak and sing it fluently and correctly, providing just one indication of their mental acumen and ability to master anything before them that should spread to all of their academics.  What made the performance even better was the presence of a large contingency of our community family from Frankfort.  Hats off to Dr. Caroline Gibson and her colleagues in the Music Department.”

The GALA was recorded by Frankfort’s Cable Channel 10 and had its first television broadcast on May 13, 2016.