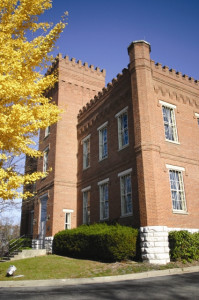 Jackson Hall was completed in 1887 by stone mason, James C. Brown. Jackson Hall was the first permanent building on campus and originally called Recitation Hall. It was later named after the first president of KSU, John H. Jackson (1886-1898 & 1907-1910).  Recitation Hall was enlarged in 1897 and housed classrooms, administrative offices, the chapel, and library space. Although the exterior of the building remains similar to the early construction, there were major renovations to the interior of Jackson Hall during President Hill’s administration in 1975-76. Jackson Hall was added to the National Register of Historic Places in 1973. The building currently houses the Center of Excellence for the Study of Kentucky African Americans (CESKAA), classrooms and a gallery.