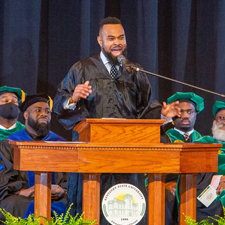 Alumnus delivers passionate address to graduates, talks about the gift of now

“It is the gift of now that has produced scholars and leaders and innovators like Dr. Rufus B. Atwood, Dr. Whitney M. Young Jr., Dr. Gus Ridgel, and Dr. Lee Charles Harris and the countless kings and queens and students who have moved this institution through unprecedented tests and countless trials and moments of triumphs and valleys of despair,” declared 2022 Baccalaureate Assembly Speaker Mario J. Radford. “And now, class of 2022, you are at your now. These last few years have just been preparation for your now.”

The class of 2014 alum made several comparisons between graduation and the scene changes that occur in a stage production throughout his address.

“When the scene changes, the stage is usually dark,” he said adding that stagehands use lights, so actors know where to go. “A lot of you graduating tomorrow are at your stage and it seems dark. Your ‘now’ seems dark and you are not sure what your ‘next’ looks like.” Radford encouraged graduates to use the light that has guided them to this point, even if all they have is a little light, he told them to, “let it shine.”

He went further to say while some are guided by a light, others on a dark stage are guided by the stage director. “It is important to know who is speaking to you while you are in a dark season. If you hold on to nothing else, hold on to the words that have been spoken to you in the night moments of your life where you felt like giving up.”

Radford told graduates that before the next scene in a stage production, the director yells, “Quiet on the set!” implying that this moment is the calm before their next performance. “Before you turn your tassels from one side to the next, know that you’re getting ready to step into the first of many great performances.”

Radford encouraged graduates with a personal tale of triumph from his days on the Hill.

The Kentucky native admitted that his lack of academic focus resulted in him flunking out of college in 2004. In 2014, however, he returned at the age of 34 to successfully complete his coursework and earn his Bachelor of Arts degree in liberal studies from Kentucky State University.

“It was dark for me for a few years. I didn’t show up to any functions; I didn’t tell anybody what was going on in my life; I even left the state,” Radford shared. “It was dark for a while, but I realized I wasn’t built to live in the dark. That the dark was only temporary because the scene was just changing.”

He ended his address reminding graduates that this is their moment; to use their light; and to hold on to every word in their moments of darkness.

The assembly was called to summons by Provost and Vice President for Academic Affairs Dr. Leroy Hamilton Jr. who reminded graduates that they are now where they dreamed of being.

“You are ready to leave these hallowed halls to begin your date with destiny. I know this journey was not always easy, but you didn’t stop; you kept climbing and look where you are today. Kentucky State University has not prepared you to run with the pack. Kentucky State has prepared you to be exceptional in your field and in your service to others.”

KSU Foundation, Inc. Executive Director Dr. Donald Lyons, class of 1968, provided the invocation asking for blessings and guidance over our graduates as they chart new beginnings and to foster a continued passion for learning.

Students were inspired by the words of Dr. Stashia Emanuel, acting executive director of Strategic Initiatives and associate professor in the School of Education.

“Class of 2022, it was already written in the heavens above that you would graduate from thee Kentucky State University on May 13 at 10 a.m. at Alumni Stadium with the weather being a high of 82 degrees. Remember you don’t always have to tell your story because time will. And, it is your time, congratulations!”

Dr. James Mable Jr. encouraged graduates through a song of faith singing that they can conquer anything, before sharing a song celebrating “Life,” reminding them to be grateful for life and that an attitude of gratitude will help their days go better.

Kentucky State University will confer 258 degrees at Commencement Convocation on Friday, May 13, 10 a.m. at Alumni Stadium.