The Fourth International Pawpaw Conference was held at the Kentucky State University campus in Frankfort and at KSU’s Center for the Sustainability of Farms and Families at the Harold R. Benson Research and Demonstration farm on September 1-3. The conference celebrated the 100th anniversary of the American Genetics Association’s 1916 Best Pawpaw Contest.

More than 160 attendees traveled from 19 states and from as far away as Slovenia, Austria, Germany, Canada, The Netherlands, and Romania to attend the event. The conference provided a unique experience for scientists, nurserymen, entrepreneurs, and enthusiasts to consider 100 years of progress in pawpaw growing and research by sharing information on the production and uses of pawpaw. Tours, tastings, invited speakers, a best pawpaw contest, and roundtable discussions on pawpaw were featured. 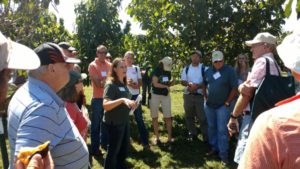 In honor of the American Genetics Association’s 1916 Best Pawpaw Contest, attendees entered pawpaw selections from around the region. The Susquehanna pawpaw variety was awarded the Best Pawpaw entry for the conference.

During the conference, Kentucky State University also announced the release of a new pawpaw variety, KSU-BensonTM, named in honor of Dr. Harold R. Benson, who served for 36 years as the KSU Director of Land Grant Programs and strongly supported Kentucky agriculture and the development of pawpaw programming at KSU during his tenure.

Adam Hughes, from Athens, Ohio, summed what a number of people were saying about the conference. “I just want to thank (KSU Pawpaw Program members Dr. Kirk Pomper, Sheri Crabtree and Jeremy Lowe) and your team at KSU for the extraordinary event you all put together to discuss and celebrate the pawpaw.” 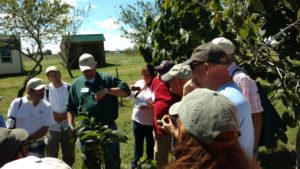