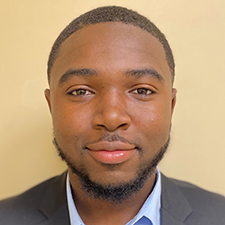 When it came time to decide on a college, I put a lot of things into perspective. For me, Kentucky State University stood out because of its rich history. I also had heard a lot of positive things about Kentucky State growing up and found it to be the most accessible school for my educational path.

What is your major and why did you choose this area of study?

I chose to major in African American studies because I am passionate about history. I grew up with little to no information about my own heritage and I never learned about African American history in school. I wanted to expand my knowledge beyond Dr. Martin Luther King Jr. and Malcolm X.

Who inspires you and why?

I am inspired by Fred Hampton. He was such a phenomenal leader and Black revolutionary. I think the way he impacted the world in the few years he was alive moved me in a huge way and helped show me the power of young folks.

What do you plan to do when you graduate?

Initially, I wanted to become an African American history teacher. But recently I believe I’ve been motivated by my ancestors to go down another path. I have become interested in political science and law school while making an impact on my hometown. I could even see myself becoming one of the youngest mayors in the history of Louisville, Kentucky.

Words to live by:

“A man who stands for nothing falls for anything.” - Malcolm X