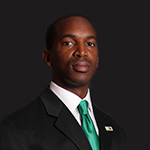 What year did you graduate from KSU? I graduated from the HPER Program in 2004

What have you been up to since graduation? I was the assistant basketball coach here from 2004-2008. I went to Stillman College in Tuscaloosa, Alabama where I was the assistant coach from 2008-2011. I earned my master’s degree from the University of West Alabama in 2009. My two children were born in Alabama. In 2011, I became the head men’s basketball coach at Bluefield State College in Bluefield, West Virginia, where I spent five years. In July 2016, I was hired here as the men’s basketball head coach.

Best memory or memories at KSU? I probably don’t have a single best memory here. It was a great night when we returned from Birmingham after winning the 2001 SIAC championship. There were students and staff waiting in Bell Gym at about 2 a.m., ready to celebrate. I met my wife when I was a student here, that’s the best memory! I have a lot great memories, the parties in Bell, hanging out in the lobbies of Kentucky Hall, Chandler Hall, and the late night grill. I think that’s why it’s so important to me for my players to leave here with the same feeling about this place that I have. When we go out to talk to prospective student-athletes, we don’t recruit, we just share the memories.

What is the most important thing you learned here? I was blessed to have people here who, while they were tough, they cared enough to push us and help us reach our highest potential. I learned discipline and perseverance from being a member of the basketball program. I learned about professionalism and the importance of presentation from Mr. Isadore Rich. I learned about the importance of relationship building from Mr. Ron Banks. I also learned about the importance of building relationships when I moved off campus and needed to get in the café, thank you Mrs. Taylor! Something that will always stay with me are excuses are not acceptable. Coach Bennett would always tell us, in a not-so-friendly tone, “Find a way to get it done!”