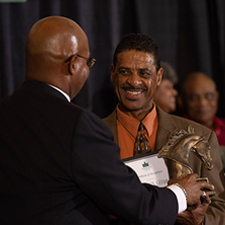 Miller owns 130 acres in Lincoln County, where he grew up farming and has operated his farm for about 30 years. He has 45 cows, whom he calls “my girls,” in his cow-calf operation. He also produces hay and a family garden.

Farming is a daily challenge, he said, but he’s grateful to be doing it. He has previously produced tobacco and is glad that he focuses on his cow-calf operation now.

“This is my livelihood, this is what I like doing,” Miller said.

Each year, the Land Grant Program chooses a Small Farmer of the Year who operates and manages a farm business, has been a producer for at least five years, and has a relationship with Kentucky State University.

Miller has been a role model in agricultural innovation for other farmers to follow in Kentucky and out of state. He is a graduate of the Leadership Agricultural Institute with the Southern University of Bough Louisiana, which is an 1890 program. He has always followed research-based recommendations on his beef cattle operation, which was toured by farmers enrolled in the Leadership Agricultural Institute in July 2019, in partnership with the Kentucky State University Cooperative Extension Program.

“KSU has been a lot of help for me,” Miller said. “That’s what helps a lot of farmers get into it, to see another farmer doing it.”

Miller was honored as the Small Farmer of the Year at the Small, Limited-Resource, Minority Farmers Conference, Kentucky State University’s annual conference, held from November 15-17 in Frankfort.