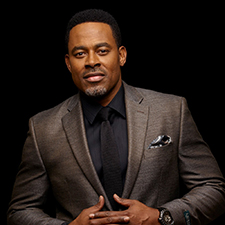 Rucker has starred in big and small screen favorites such as Tyler Perry’s “Why Did I Get Married” films, “Meet the Browns” and the iconic “The Temptations” miniseries. Rucker has also tackled difficult subjects in “Service to Man,” “The Man in 3B,” “Black Coffee,” and “Cooking Up Christmas.” Rucker also played roles in “Half & Half,” “All Of Us,” “Law & Order,” “As The World Turns,” and “All My Children.”

In 2015, Oprah Winfrey invited Rucker to star as Jacob Greenleaf in the groundbreaking original TV drama series, “Greenleaf,” which took the world by storm for five seasons.

Rucker is also a strong supporter of organizations including the Association of Black Cardiologists, the American Heart Association, The Black AIDS Institute, The AIDS Healthcare Foundation, Project Pneuma and BMe Community.

Not only an actor and an activist, Rucker is the CEO and co-founder of The Black Gents, a collective of African American artists assigned to share and shine the light on the positive images, inspiring magnificence and infinite examples of the assets, beauty, brotherhood, fatherhood, creativity and service of Black men throughout the diaspora. Rucker is also the president and CEO of a global consulting company and successful production company.

An author and advocate for education, Rucker’s books include the best-seller, “REACH: 40 Black Men Speak on Living, Leading, and Succeeding.”

Nine-time Grammy nominated singer and songwriter Kelly Price is the musical guest for the convocation. Price’s debut album, “Soul of a Woman,” went double platinum and featured her record-breaking single, “Friend of Mine.” Price worked with artists like Whitney Houston and Mariah Carey, and sang on “Mo Money Mo Problems” featuring Puff Daddy, Ma$e and the late Notorious B.I.G.

The Kentucky State University 2021 Spring Commencement Convocation will take place Friday, May 7 at 10 a.m. in Alumni Stadium and will celebrate the fall 2020 and spring 2021 classes.

Due to the ongoing global pandemic, seating is limited and no processionals will take place. Graduates and attendees will be screened prior to entering Alumni Stadium for commencement. Restrictions and safety protocols will be in place for all in attendance.