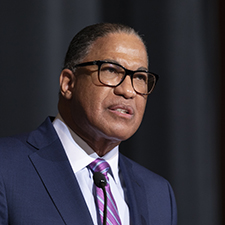 Darryl R. Matthews Sr., national partnership specialist with the U.S. Department of Commerce, said “the day begs you to make your voices heard.”

Additionally, from 2005-2008, Matthews was the 32nd General President and Chairman of the board of directors for Alpha Phi Alpha Fraternity, Inc., where he presided over the fraternity’s centennial convention and the ceremonial groundbreaking for the King Jr. Memorial.

“The time has come for Black Americans to rise to the challenge again to focus on making impactful history on Black life in America, Matthews said.

Matthews called on attendees to create a plan that results in accumulated capital, reestablished banks and fund the development of communities.

“We hold the keys to the forward progress of the race,” Matthews said.

Yasmine K. Harper and Cameron J. Galloway, Miss and Mister Kentucky State University, told attendees that “today we remember Dr. King by the legacy he left behind and to pick up where he left off. We challenge everyone to keep the legacy of the dream alive.”

“Thorobreds, what and how much are you willing to pay for your dream,” Emanuel said. “The cost is great, but so is the reward. Ask yourselves, how much are you worth and are you ready to pay the cost for the dream?”

Dr. Carl H. Smith was honored with the John Henry Jackson Achievement Award for his superior achievements in the field of music.

Charles H. Lambert was presented the Spirit of King Award for exemplifying the character and legacy of Dr. Martin Luther King Jr.

Selections included “Lift Every Voice and Sing” by the Kentucky State University Chamber Singers, “God of Our Weary Years” by Dr. Lloyd B. Mallory Jr. and the Alma Mater by Jessica Edwards.