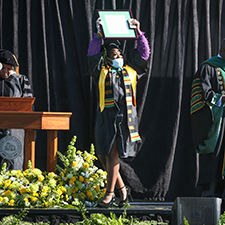 Nurses, educators, business professionals, computer scientists, social workers and future leaders of all kinds now go forth from the University, ready for the next level of success.

As the class that was born after 9/11 and is living through COVID-19, Bryant applauded the resilience of the class and encouraged them to continue doing great things.

“You are not here just for window dressing,” Bryant said. “Break the glass ceiling and change the world as we know it.”

Derek Roberts, who finished with a computer science degree, was the class valedictorian.

Roberts said his four years at Kentucky State were a metamorphosis for him.

“Loneliness was my gospel,” Roberts said. “Isolation was my form of worship. Depression and grief had compounded me into a cocoon of isolation. That was the man who enrolled in this university four years ago.”

Roberts emphasized to the audience that they are not alone.

“You don’t hear one voice in these streets demanding change, you hear a community,” Roberts said. “You are not alone.”

Musical guest and national recording artist KeKe Wyatt brought the house down with musical selections “Great is Thy Faithfulness,” “For Every Mountain,” “If Only You Knew” and “I Will Always Love You.”

President Brown honored and acknowledged the golden graduates of the class of 1970, celebrating their 50th anniversary, with Alazene Walker Johnson providing the class response.

President Brown gave each graduate their first $20 instead of the traditional $2. President Brown also brought in surprise special guest Poppa Hussein, who brought the graduates to their feet with his hit “I’m Lit.”