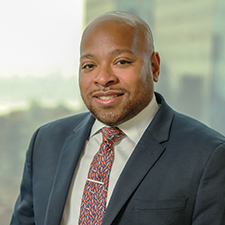 A Kentucky State University alumnus has carved out a career in public finance after earning a bachelor’s in public administration from the College on the Hill.

Alexander said he originally wanted to work in education to help close the gap among underserved communities.

“I changed my major halfway through my freshman year to public administration after going home for a visit and driving through Dayton, Ohio and questioning ‘why are there so many abandoned homes, buildings and lack of access to basic human needs?’” Alexander said. “This turned into an overwhelming passion to involve myself in the public sector in a way that would benefit communities of blight.”

After earning his master’s in 2005, Alexander began his career at Standard & Poor’s, where he joined the U.S. Public Finance Department.

“Before I graduated from The New School, I recall telling a friend ‘I would love to work for a company where I could go into different cities and states, understand them and contribute to the development of those municipalities.’  I then landed a job at S&P where I was just that, with an unbiased approach,” Alexander said.

Alexander rose from associate to senior director until 2017, when he left for Fitch Ratings. Alexander also previously served as the primary analyst for the Kentucky Housing Corporation.

“My career has afforded me the opportunity to travel across most of America and abroad providing credit opinions and for speaking engagements,” Alexander said. “I am happy with the work that I have done. I’ve never actually calculated the impact my work has had on many communities across the U.S. however, I know it's significant enough for me to feel very comfortable working for a financial service firm while doing impactful work at the same time.”

“I gained a tremendous amount of leadership skills while at Kentucky State,” Alexander said. “Skills I didn’t know I possessed. I will always herald Kentucky State as the place where I began to gain confidence in being an effective leader.”

Some of his favorite memories include planning events for Homecoming 2002 and serving as SGA president and student regent in 2002-2003.

“The friendships I created and the memories with those friends are countless,” Alexander said.

Alexander said his best advice to current and future Thorobreds is to enjoy your time at Kentucky State and keep your eye on the reason why you are there.

“In everyone’s lifetime there will be roadblocks. Use the tools that you are going to college to gain to help you get around those roadblocks,” Alexander said. “Oftentimes what seems like a barrier is really a checkpoint, a time to re-center and refocus on what’s important to you.”

Alexander said he originally enrolled at the University of Cincinnati, but decided in late summer that he wanted to attend an HBCU.

“If I had not attended and graduated from Kentucky State I highly doubt that I would be where I am today,” Alexander said. “Kentucky State opened up my eyes to a world of opportunities outside of Ohio.”