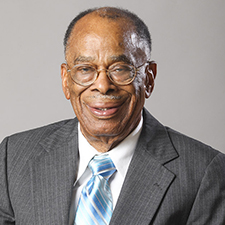 News of Ridgel’s death brought a deep sense of loss to the campus on the Hill and the entire University community.

“Amid this pandemic, any loss of life is beyond difficult given the restrictions we face in celebrating our loved ones. Thorobreds everywhere will remember and honor the excellence that Dr. Ridgel demonstrated throughout his life and career at Kentucky State with a commitment to our students and the institution. He genuinely loved all of Kentucky State. We will miss his presence and I will miss his counsel,” Brown said.

Ridgel’s life is a testament to his fight for social justice and equality. He was part of Concerned Student 1950, the first group of African-American students admitted to the University of Missouri. Ridgel was admitted to the graduate program in economics in 1950 after civil rights groups won a court ruling desegregating the university. Blazing a trail, Ridgel received a master’s degree in economics with honors two semesters later.

In 2018, the University of Missouri named a new residence hall atrium in honor of his civil rights activism.

Ridgel believed in the good of humanity, and he believed in Kentucky State. He never lost his spirit and loved every visit to the College on the Hill, Brown said.