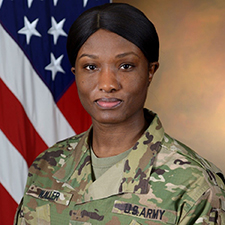 A Kentucky State University alumna was recently promoted to the rank of Lieutenant Colonel in the Army National Guard.

La’Shawna Waller, who earned undergraduate and graduate degrees from Kentucky State, now holds the rank of Lieutenant Colonel and serves as the operations officer for the Army National Guard G-9, Installations and Environment Directorate.

Waller earned a master’s in special education by taking online courses while she was deployed in Kuwait.

Waller graduated from Kentucky State University in 2005 with a Bachelor of Science in biology. She was commissioned as a Quartermaster Officer in May 2005 from the University of Kentucky ROTC program and assigned to the Kentucky Army National Guard. As of June 1, she holds the rank of Lieutenant Colonel.

In an interview in the Spring 2017 Onward and Upward magazine, Waller said, “Starting the program while deployed helped me focus on something else rather than my deployment. It was a type of mental escape for me.”

Waller also holds a Master of Science in environmental management from Webster University.  She is currently pursuing an Ed.D. from Peabody College at Vanderbilt University in leadership and learning in organizations.

Waller has served in two combat tours and has held a variety of leadership positions at the operational and strategic levels.

Waller currently resides in Alexandria, Virginia where she is heavily involved in the community. Waller currently serves as the president for the DC Area Kentucky State University Alumni Chapter. She attends Alfred Street Baptist Church and is a member of the Voices of Triumph Choir. Waller is also a member of the Northern Virginia Alumnae Chapter of Delta Sigma Theta Sorority, Incorporated.