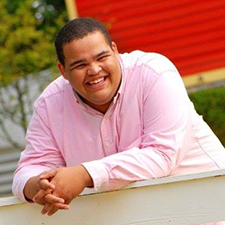 A Kentucky State University graduate overcame the loss of his grandfather and father within a week of each other to earn the honor of valedictorian for the spring class of 2020.

Derek Roberts, a computer science major from Frankfort, said his grandmother inspired him to become valedictorian.

During his undergraduate career, Roberts was awarded Outstanding Computer Science major in 2018-2019, a highly selective honor awarded to one student per year. Roberts was the chair of Kentucky State’s Institute of Electrical and Electronics Engineers (IEEE) robotics team and was part of a Kentucky State team that placed first out of 100 teams in the 2017 IBM HBCU Watson Hackathon in Atlanta, Georgia.

Outside of Kentucky State, Roberts was selected to participate in the highly competitive National Science Foundation (NSF) Research Experience for Undergraduates (REU) for Immersive Media Computing program in May 2019 at Georgia State University.

According to Dr. Chi Shen, Chair for the School of Mathematics & Computer Science, Roberts’ mentors at REU were so impressed with his work that they asked for more students from Kentucky State for the following year’s program.

Despite that, Roberts said, “I mostly just kept my head down and focused on classes.”

“When my grandfather died, a lot of things changed for me so I set forth on this path and now it feels like a kind of redemption,” Roberts said.

Trying to finish a degree in the midst of a global pandemic hasn’t been Roberts’ only challenge, he said.

“Grief and depression were and still are (a challenge) to some degree,” Roberts said.

Roberts said the grief from the death of his grandfather and father didn’t hit him instantly.

“It almost never does,” Roberts said. “It came at me in waves and struck out of the blue. The depression I had been living with for longer and older grief was still lingering, but the fresh grief compounded it.”

Roberts said some days he would feel paralyzed, helpless and unmotivated. At times, he said he had never felt more alone in his life.

“I felt like I was drowning,” Roberts said. “Coming here (at Kentucky State) felt like latching on to a buoy to keep from that. I tried to remember the last time that I was truly happy, and oddly enough, it was at school. So I latched on.”

Roberts said when he started at Kentucky State, he would show up, keep his head down and focus on school work.

“My goal was just to get a degree and get out,” Roberts said. “I would turn down opportunity after opportunity because I didn’t feel confident or qualified.”

Thankfully, people on campus were watching Roberts work and recognized that he was qualified.

Roberts said Dr. Chi Shen would email opportunities to him and Roberts would tell her he didn’t think he was capable or suited, but she would convince him to apply anyway.

Roberts said it’s taken a whole village to get him to the finish line, but Dr. Jens Hannemann has been a brilliant mentor to him, he said.

“He believes in me more than I believe myself, thus sparking the courage in me to be better,” Roberts said.

“He’s the best student I’ve ever had,” Hannemann said.

Dr. Abdul Turay, acting dean and professor of economics in the College of Business and Computational Sciences, also had kind words about Roberts.

“Mr. Derek Roberts exemplifies a rare maturity seldom seen among college students today,” Turay said. “He is an intellectually adept and sociable young man. His ambition and persistence in his quest for personal and professional success earned him the reputation as one of the most outstanding student leaders in the Kentucky State community.”

Roberts said his professors believed in him in ways he could never believe in himself.

“It’s hard to put in words how much I appreciate that and how much that means to me,” Roberts said.

Becoming valedictorian and nearly completing his undergraduate journey has been hard to wrap his head around, Roberts said.

“Looking back, I came here looking for a way out and found a way forward,” Roberts said. “Battling depression for me isn’t about chasing an ultimate victory where it’s gone forever. It’s about day-by-day doing what it takes to not only survive it, but build a life in spite of it. A way forward. I will always have to fight it, but I’m not alone. I never was. Even in this pandemic.”

“No matter how uncomfortable I feel, if my story can inspire someone else to do what it takes to reach for that buoy to keep from drowning, whether it be by sharing their own story, reaching out to a friend, or even just partaking in some good old fashioned self-reflection, it was worth it,” Roberts said.

After graduation, Roberts said he wants to work as a software engineer and travel.

“No matter what happens, I’m confident in my abilities and more importantly, my support system,” Roberts said.