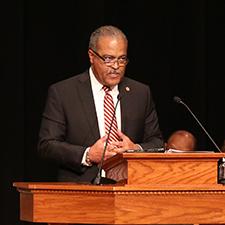 Murray, the 31st Grand Polemarch of Kappa Alpha Psi Fraternity, Inc., said it’s important to celebrate our heritage by giving honor to those who came before us, who fought against the injustices in this country.

“Our ancestors were filled with wisdom beyond their years,” Murray said. “They recognized opportunities they had been denied. They learned they were not on a level playing field. At this time in our history, we sit with scholars from all walks of life.”

The Heritage Assembly is a time to honor those ancestors, Murray said.

“Today we celebrate black heritage,” Murray said. “We pause to give honor to their memories and difference in society.”

Murray spoke of the historical impact Kentucky State has made and encouraged audience members to seize the future impact it will have.

“This institution is the gateway to transforming the lives of American young people,” Murray said. “Participate in strengthening your communities. You are our next mayors, our next doctors. You can make a difference in this nation.”

Murray also called on everyone to vote, urging everyone to participate in the electoral process.

“I pray that each graduating class will continue to build upon the legacy of those proceeding them,” Murray said. “We can change the plight of the least of these in our society at large.”

The Showcase of Historically Black Colleges and Universities received the Access Heritage Award for significant contributions to the equal educational opportunity and institutional access heritage of Kentucky State University.

Dr. James Tidwell received the Agricultural Heritage Award for significant contributions to the agricultural heritage of Kentucky State University. Tidwell has been influential in the success of Kentucky State’s internationally known aquaculture program.

Lorenzo A. Croft received the Athletic Heritage Award for significant contributions to the athletic heritage of Kentucky State.

Croft is a former Kentucky State football and track and field student-athlete and a longtime supporter of Thorobred athletics.

Dr. Gashaw Lake received the Academic Heritage Award for significant contributions to the academic heritage of Kentucky State. Lake previously served as professor of public administration for many years at Kentucky State.