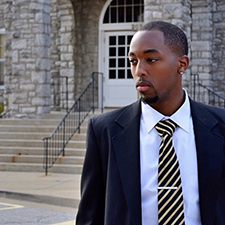 A Kentucky State University alumnus has found his niche in business.

Nocomis Miner II, a 2016 graduate and a Detroit native, is the owner-operator of Cardinal Nutrition in Louisville.

“I’ve always wanted to own a business, but I was not exactly sure what that would look like because I had several ideas in mind,” Miner said. “I’ve always been a hard work and go-getter, so owning my own business came naturally to me. I just needed to focus on the specifics of doing that.”

“Opening the shop was one of the best days of my life,” Miner said. “Having my family and friends with me, as well as a major outpouring of community support really made me feel I had done the right thing.”

“I initially wanted to make the healthy shakes a part of BLM, but I really wanted to expand my brand and business beyond Frankfort,” Miner said. “I found the perfect spot in Louisville to make that happen, not too far from UofL’s campus. The business there has been great.”

Miner said word spread quickly and he was given the opportunity to partner with UofL to open Cardinal Nutrition 2 on the main campus.

“I am constantly reminded of my time at Kentucky State,” Miner said. “I grew into the man I am today because of the lessons and leadership I learned on the Hill.”

Miner said he encourages current and future Thorobreds to never give up and always remember that other people’s limitations don’t exist in your world.

Miner is also an active member with the National Association for Black Veterans, the National Society of Leadership and Success and Alpha Phi Alpha Fraternity, Inc.