Coach Jackson, a KSU graduate, was recently the Bluefield State College, West Virginia, Head Men’s Basketball Coach. Jackson was hired on the eve of the 2011-2012 season as the Interim Head Coach before being named head coach on April 1, 2012. While at Bluefield State, Jackson coached one member of the WVIAC All-Conference team, three members of the ICAA All-Conference team, one All-ECAC Team member and two Boxtorow.com Division II All-American Team members. 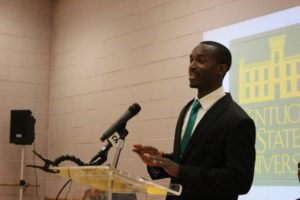 Following his year as Interim Head Coach, Jackson increased the previous season’s win total during each of his years as Bluefield State College’s Head Coach before the 2015-16 season. Bluefield State finished the 2014-15 season with their highest win total since the 1995-96 season. Jackson’s team also ranked first nationally in fewest turnovers during the 2014-15 season.

Before arriving in Bluefield, Jackson served three seasons as an assistant coach at Stillman College before being promoted to the position of associate head coach in the summer of 2011. While at Stillman, Jackson helped guide the program to its first-ever national Top 25 ranking, as well as a 2011 NCAA Tournament appearance, where they advanced to the round of 16. Jamaal also has been an assistant at KSU from 2004-2008. While at Kentucky State University, he coached the 2008 SIAC Player of the Year. Coach Jackson served as a Student Assistant Coach during the 2000-2001 season, helping the Thorobreds win the 2001 SIAC Tournament Championship and earn a berth in the NCAA National Tournament. Jackson also served as an intern with The Ohio State University Men’s Basketball Program as they advance to the 1999 NCAA Final Four.

“As an alum of Kentucky State University, it would be a mission that I would take personally to return our program to the heights that we once realized,” Jackson said.  “I am prepared to develop our student-athletes both athletically and academically so that they will not only be successful here on the court, but they will graduate from Kentucky State University, prepared to serve.”

Coach Terrance Slater, a standout collegiate player at Western Michigan University, has more than 10 years of experience in athletics that include playing professional basketball in the International Basketball League overseas in France and Switzerland and North Charleston, South Carolina, Battle Creek, Michigan, and Grand Rapids, Michigan.

Most recently, Slater has had successful records as the associate head coach of the Thorobrettes. Slater helped guide the program to become the first team in school history to achieve a top 25 ranking, two SIAC regular season championships, and back to back NCAA tournament appearances. The Thorobrettes also compiled a home recorded of 22-2 and an overall recorded of 46-11 in the past two seasons. Over the previous two seasons, Slater has been in charge of recruiting, scouting, and player development.

While Slater was the assistant coach during the 2014-2015 season, the women’s basketball team earned an at-large bid to the NCAA Division II regionals and was one of 10 teams in the NCAA Division I and II to win 14 straight games.  Along with his successful playing and coaching career, Slater has served as an NBA scout and a recruitment coordinator.

“I have high expectations for myself, our coaches and our student-athletes. We have an outstanding group of returners and a deep and talented incoming class,” Slater said. My goal is to continue to the success of the program and serve as an ambassador for Kentucky State University in the community. We will play an exciting style of basketball that will appeal to fans of all ages.”