The program, funded through EECapacity and the U.S. Environmental Protection Agency, seeks to empower future environmental leaders by training them on environmental and professional development themes. 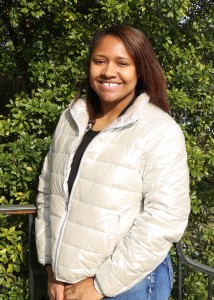 KSU student leader Esters was among the excited group that traveled to Jabez, Ky., on February 5-6. They met with student cohorts from Eastern Kentucky University and Murray State University. While there, they learned from state leaders in the environmental education field on topics such as: leveraging networks for success, marketing environmental initiatives, the fundamentals of environmental education, and the basics of climate change.

“The retreat is new,” Esters said. “They have been getting students to become certified educators in climate change and forestry through KAEE.”

“It’s a great honor. We were given a $1,000 grant from KAEE to do environmental initiatives on campus,” she said.

KSU campus projects during April include Reforest Frankfort on April 2. KSU students will plant more than 2,500 trees around the University. The following week Farmer Brown (Trevor Claiborn) will visit several schools to teach students about environmental education. In addition, plans are in the works for a butterfly garden on campus, she said.

Esters, who is the vice president of the Green Society, also mentioned an event where she would like for President Raymond M. Burse to play an active role in a Green Society-sponsored event on Earth Day.

“We’ll be incorporating a Field Day, and we hope that President Burse will partake in dumpster diving for recyclables,” she said.

Esters, a pre-environmental engineering and liberal studies double major, already is planting seeds for her own future as an environmental engineer for Aluminum Company of America (Alcoa) in Newburg, Ind. The company is about 30 minutes from her hometown of Evansville. Esters completed an internship with the company last summer.

“I will be dealing with their solid waste management and water management,” she said. “Since I already know their techniques and the way they do things, I want to stay there for about five years – and then move on somewhere bigger like Texas, maybe. I’ve always wanted to move to Texas. “