Institutional Research Analyst Shimar Keith spends a lot of time studying data on a small screen in his office at Kentucky State University. But soon viewers will see him on the big screen in the independent Christian film, “Andy’s Rainbow.”  The film will be featured at 7 p.m. on December 15 at the Kentucky Theater in Lexington, Kentucky.

Keith learned about the role earlier this year through one of his friends who happens to be the director’s brother. 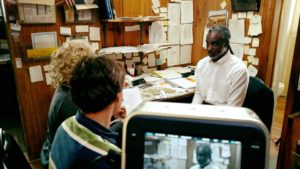 Shimar Keith rehearses his scene on the set of “Andy’s Rainbow.”

“The director called and asked me if I had any acting experience, and I told him, ‘No.’ The closest that I had gotten into acting was being in the drama club in high school,” he said. Yet the director asked Keith to send him a YouTube video of himself reading the lines, and he landed the part of Frank Hall.

“I had to drive to Salem, Indiana, and the whole scene took 45 minutes to shoot.  I’m in the movie for three minutes,” Keith said, laughing. “My character owns a lumber yard, and the main character, Andy, is interviewing for a job at the lumber yard.”

The movie doesn’t have an official release date, but it has opened in independent film theaters. It also has been getting high marks online on sites such as IMDB.com. The film’s rating received a 9.4 out of 10.

“The movie is intense,” Keith advised. “If you are planning to go see it, bring a box of tissues.”