FRANKFORT —   “Listen! A Musical Celebration of Christmas at Berea College” a concert special will be broadcast at 11:35 p.m. Saturday, December 24, on WKYT (CBS Television Network). Among the melodious mix of Christmas and holiday music performed by students and music faculty of Berea College, will be soloist Kentucky State University (KSU) Development Services Coordinator Mary Jackson. Jackson, an alumna of Berea College, will sing “Birth of a Promise.”

“The song is a classical piece by, in my opinion, one of America’s greatest contemporary composers, Dr. Diane White-Clayton,” she said. 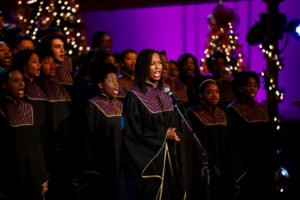 Although it will be Jackson’s first time singing on television, her voice already has made an impression with several dignitaries such as Civil Rights Activist Julian Bond, former NAACP Executive Director Benjamin Hooks, former Kentucky Governor Steve Beshear and the family of retired Four-Star General Colin Powell.

“I was actually kind of a late bloomer because I didn’t start singing until I was 13,” she said. “I was singing on the bus riding home from middle school, and a friend of mine, who is also a singer said, ‘Oh wow, I didn’t know you could sing!’ I said, ‘No, I can’t sing,’ and she said, ‘Oh, yes you can!’ That’s how I learned that I could actually carry a tune.”

Jackson then started singing in her church’s choir and performed her first solo when she was 14. She graduated from Berea College with a major in Communications and a minor in music in May 2004. Jackson also has a graduate degree in Voice from Eastern Kentucky University. Her mentor and Berea College Music Director Dr. Kathy Bullock played a key role in helping Jackson to develop as a singer.

“Dr. Bullock is an esteemed musicologist, music theorist, music historian — just an amazing person. She and her husband, 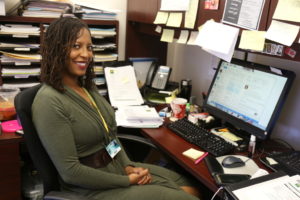 Keith, they are both like my second set of parents,” she said. “She knew that I was in the area and thought it would be great for me to come back and participate with the choir – and to have an alumnus as part of the presentation.”

Nearly 200 students participated in the production this year, which included the student musicians and singers who performed on stage as well as dozens of students who helped behind the scenes decorating Phelps Stokes Chapel in Berea, Kentucky.

“I have sung in a lot of exciting places and had some really exciting and interesting gigs, but never had the pleasure of singing on national television,” she said. “I’m really grateful for the opportunity.”