High school students in western Kentucky were given an opportunity to snatch express tickets to become Kentucky State University Thorobreds on Friday, Jan. 30, when the KSU Thorobred Express made its first stop in Hopkinsville, Ky. 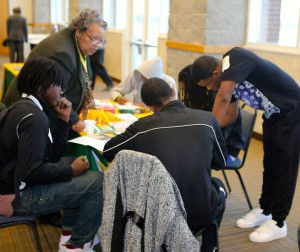 The Thorobred Express is a mobile recruitment initiative that carries faculty, staff, students and other representatives of the university across the Commonwealth of Kentucky to educate the community and prospective students on what being a Thorobred is all about.

The first stop was appropriately in the hometown of KSU President Raymond M. Burse and the current Miss Kentucky State University Marquisha Jackson.

Hopkinsville and Christian County high schools sent busloads of students to the college fair at the Bruce Convention Center. Many of the students who attended had already applied to the university and wanted to learn more. Several dozen applied onsite and had their application fees waived.

“Our master’s in aquaculture is one of the top five in the nation and No. 1 in Kentucky for identifying and finding cures for fish diseases,” KSU student Ralph Williams told the crowd in a segment called “Did you know?”

The assembly also included a rousing performance by the Mighty Marching Thorobreds and the KSU Concert Choir.

Hopkinsville Mayor Carter Hendricks proclaimed Jan. 30, 2015, as Kentucky State University Day and presented Burse with a key to the city during the assembly.

“Every student who enrolls and matriculates through Kentucky State and is willing to work, we will make a successful young man or young woman,” Burse said. “I want to make sure that the people I know in this region get the best education they can get.”

Alexus Watkins, a senior at Hopkinsville High School, said she was excited about the opportunity to learn more about KSU.

After venturing from table to table, talking with faculty and graduate students, Watkins said she was even more interested in becoming a student at KSU.

Tierra Freeman, interim chair of the Division of Behavioral and Social Sciences, said she was excited about the enthusiasm among faculty.

“We had wonderful faculty participation and everybody represented,” Freeman said. “There was a lot of energy.”

Members of the KSU National Alumni Association as well as members of the Hopkinsville Alumni Chapter were also on hand to talk with prospective students and answer questions.

Shana McCombs, a 2012 graduate of KSU and former Miss Kentucky State University, represented the Hopkinsville Alumni Chapter, which she said planned to follow up with students who applied.

“It’s time for the alumni to really put our foot forward,” McCombs said. “Without alumni, how can you build the school?”

Jay Allen, president of Hopkinsville Community College, also signed an agreement with KSU President Raymond M. Burse for a joint admissions program that is intended to increase the number of students from the Hopkinsville area who receive both an associate degree and bachelor’s degree.