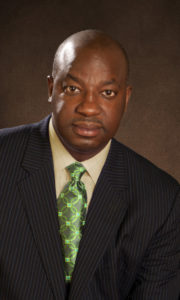 M. Christopher Brown II is the 18th president of Kentucky State University and founder of the Atwood Institute on Race, Education, and the Democratic Ideal.

After earning his Ph.D., Dr. Brown joined the faculties of the University of Missouri-Kansas City, the University of Illinois at Urbana-Champaign, and The Pennsylvania State University where he earned tenure.  During a professional leave of absence, Dr. Brown served as executive director of the Frederick D. Patterson Research Institute of the United Negro College Fund (FDPRI/UNCF), director at the American Educational Research Association (AERA), and vice president at the American Association of Colleges for Teacher Education (AACTE).

Dr. Brown’s Alcorn presidency reinvigorated one of most important public college campuses in America.  Under his leadership, the university experienced record enrollment growing to over 4000 students for the first time in its 140 plus year history.  Dr. Brown also dedicated a $47 million, state-of-the-art student housing complex, spearheaded the renaming of Highway 552 in honor of the university’s longest-tenured president – Dr. Walter Washington, and dedicated the world’s largest statue to Alcorn alumnus and civil rights figure, Medgar Evers.  In addition to establishing the Office of Educational Equity and Inclusion, Dr. Brown hired the first non-black head football coach in both institutional and the Southwestern Athletic Conference (SWAC) history.

Dr. Brown worked to develop and maintain a campus atmosphere dedicated to “excellence without excuse”.  Without question, he increased awareness of the Alcorn institutional brand and enhanced its recognition.  In 2012 Alcorn State University received the highly coveted HBCU of the Year Award, and in 2013 Dr. Brown was named Male HBCU President of the Year – both from the National Center for HBCU Media Advocacy.

Dr. Brown served as senior fellow at the American Association of State Colleges and Universities (AASCU).  As a member of the Division of Academic Leadership and Change, he was responsible for assisting with the periodic review and improvement of administrative leadership training and development programs sponsored by the association, developing rubrics and monographs incident to presidential leadership and university governance, as well as other institutional support projects.  During his fellowship, he completed a book with Dr. Christopher Knaus, "Whiteness Is The New South Africa:  Qualitative Research On Post-Apartheid Racism In Schools And Society".

Dr. Brown is the author/editor of 16 other books and monographs.  He is the author or co-author of more than 100 journal articles, book chapters, and publications related to education and society.  Regarded as an international scholar, he has lectured and/or presented research in various countries on six of seven continents – Africa, Asia, Australia, Europe, North America, and South America.  He is especially well known for his studies of historically black colleges, educational equity, and professorial responsibilities.  His research and scholarly writing includes publications on education policy, governance/administration, and institutional contexts.

Dr. Brown is the recipient of the 2001 Association for the Study of Higher Education’s Promising Scholar/Early Career Award, the 2002 AERA Committee on Scholars of Color Early Career Contribution Award, the 2007 Philip C. Chinn Book Award from the National Association for Multicultural Education, the 2008 Association of Teacher Educators Distinguished Educator Award, and the Association of Public and Land-grant Universities Commission on Access, Diversity, and Excellence 2013 Distinguished Service Award. Dr. Brown received the Isaac Murphy Image Award for Education at the 2012 Kentucky Derby.  He was also recognized with a 2013 Trofeu Raca Negra (Black Race Trophy) from the Honors Council of the Society of Afro-Brazilian Socio-Cultural, the 2015 Distinguished Alumnus Award from South Carolina State University, and a 2017 Trumpet Award for Spiritual Enlightenment.

A former member of the South Carolina State University Board of Trustees, Dr. Brown is a member of the Alpha Phi Alpha Fraternity, Incorporated, the 100 Black Men of America, Rotary International, a 33rd degree Free and Accepted Mason Prince Hall Affiliation, and an ordained Baptist minister.

He is married to the former Adrienne Joyce Allen of Canton, Mississippi.  Mrs. Brown is a middle school teacher.